A Betrayal of Trust: The Morgan Affair and its Aftermath

Every organization has its skeletons hidden away in its closets; dark deeds in its past that many would rather not deal with.  However, it is always a bad idea to hide things away, as they have a tendency to come out and bite you when you least expect it.  And keeping members of your own organization ignorant means that they will only end up blind-sided when the subject is brought up by some hostile party.  With this in mind, I have decided to write a bit about what has come to be known as the Morgan Affair, and how his one incident has affected Masonry all the way up to the present day.
William Morgan was born in 1774 in Virginia, and worked at a number of jobs, though often as an operative mason.  He was a man of dubious character; evidently a heavy drinker and a profligate gambler.  He claimed to have been a captain in the U.S. Army, though army records show that this was most likely a lie.  In spite of his reputation, he became privy to the secrets of Masonry, but when he moved to Batvia, New York, his petition to affiliate with the lodge there was rejected.
In anger, Morgan announced that he would be publishing a tell-all exposé revealing the ceremonies of the Blue Lodge degrees.  Morgan began to prepare his work by affiliating with other disaffected men, in particular the publisher David Miller.  While exposés of this sort had been published on the Continent, none had ever been produced in the United States.
The members of the Batvia Lodge, horrified at what was happening, publicly denounced Morgan, and then turned to unscrupulous methods to silence him.  A number of them accosted Morgan, claiming that he owed him money, and had him thrown into debtors' prison.  Miller promptly secured his release, however a few hours later Morgan was again arrested, this time under the charges of stealing clothing.  He was being held in the Canandaigua jail when Loton Lawson, Captain Ed Sawyer, Nicholas Chesebro, and several others paid his bail, and left with him in a coach headed to Fort Niagara.  What followed is unknown, as there are multiple accounts; all of them untrustworthy and unsubstantiated.  However, it seems that he was either paid a considerable sum to travel to Canada and never return, or that he was murdered and that his body was dumped in the Niagara river or lake.  A body was found, a short time later, and buried under his name, though the body actually was that of a Canadian; Timothy Monroe.
Whatever occurred, it was not sufficient to stop the publication of his exposé, which came out in 1830, called "Illustrations of Masonry", and David Bernard published "Light on Masonry", which used Morgan's information.  This, in combination with his murder, caused an immense outrage in the general public.  The fact that the Masons who were brought to trial served only very light sentences did not help the situation much.
Thurlow Weed,  a supporter of John Quincy Adams, found the outrage to be perfect fodder for his own political needs.  Adams was being opposed by Andrew Jackson, and not doing well at all.  But Jackson was a well known Mason.  Weed began a political party called the "Anti-Masonic Party," using the Morgan Affair as a catalyst to feed off and augment the anger and suspicions of the populace against Masonry, in order to weaken Jackson's position.  To do this he fomented rumors that the Masons were an elite group that were trying to secretly control all of government and society.  In essence, this was the birth of all the conspiracy theories that plague Freemasons to this day.
The Anti-Masonic Party challenged the Democrats and the Whigs, and became the first viable third party in United States history.  Though it was not particularly long-lived, it's hallmark strategy of tearing down opponents by denigrating their Masonic ties (real or perceived), was incredibly successful in pandering to and augmenting public fear.
However, fear was not only growing among the public, but also among Masons.  As a result, a strong movement grew among the lodges in the United States to be more transparent and less esoteric, in an attempt to allay public suspicion and avoid criticism.  It was in this time period that aspects of the Craft that were at all outré were actively repressed.  The chamber of reflection, once common, became practically extinct in the States, as did any idea of Spiritual Alchemy and Hermetic Philosophy.  Masonry in the United States started on a downward slope towards becoming a mere fraternity, with the end result of nearly dying out all together in the middle part of the last century.
In the end, the combination of Morgan's betrayal of the Craft, and the Batvia Brothers' betrayal of their obligations to be good and upstanding Men, caused ripples of damage that more than 175 years have not fully disappeared. 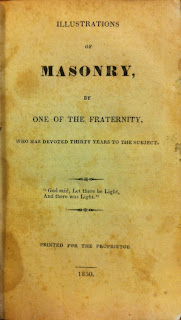