While many lodges today do not use a lot of music in their meetings and ritual (and those that do often have only an old piano in the corner or a small CD player), historically music has had a large part in Masonry.  Many well known composers have been Masons, and many of them wrote music specifically for use in Lodge.
We tend to think that Masonic music must be rather serious stuff, but in reality that is far from the truth.  Our contemporary use of music is mostly in solemn lodge functions, but that was not always the case.  In the past music was a very vibrant part of both the ritual and social aspects of the Craft.  A short time ago, in my job as a restorer of old books, I had the chance to work on a very interesting book published in 1816 with the following lengthy title: "The Masonick Minstrel; a Selection of Masonick, Sentimental, and Humorous Songs, Duets, Glees, Canons, Rounds, and Canzonets Respectfully Dedicated to the Most Ancient and Honourable Fraternity of Free and Accepted Masons."  (The photograph shows the state of the book before and after working on it). 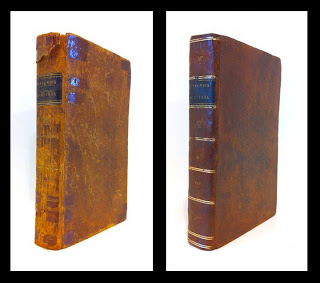 Far from serious esoterically inclined hymns or dirges, most of the songs are quite lighthearted.  They were obviously meant to strengthen fraternal bonds through time spent singing together, most likely over the festive board.
In more recent years Masonry has had its fair share of lighthearted composers as well, though not perhaps recognized as such, nor, to the best of my knowledge composing music specifically for Masonic functions.  Some of these names will be very well known: William "Count" Basie, Lionel Hampton, Nat King Cole, John Phillip Sousa, and Duke Ellington, to name a few.  Some of Sousa's music could be used very well in Lodge; perhaps his "El Capitan" could be played at the next Grand Lodge Visitation. . . .


We are perhaps more familiar with more classical music when we think of Masonic Composers, and with good reason:  There certainly has not been a shortage of famous composers who were Masons.  Some of the most notable are: Leopold Mozart and his son Wolfgang Amadeus, Franz Joseph Haydn, Sir Arthur Sullivan (of Gilbert and Sullivan fame, and Grand Organist of the United Grand Lodge of England), Franz Liszt, Nicamor Abelardo, Johan Christian Bach, Thomas Arne, Johannes Brahms, and Jean Sibelius.
While not specifically Masonic, Brahms' "Requiem" is based on biblical texts, used to depict Humanist themes; a concept which should ring true familiar with every Mason.


Jean Sibelius did write a number of pieces that are Masonic in nature, such as "Masonic Ritual Music, Op. 113", "Ode to Fraternity", and "Praising Hymn".

Of course the most well known Masonic composer is Wolfgang Amadeus Mozart, and his most renowned Masonic work is the Magic Flute.  However, while the Magic Flute may be about Masonic ideas (to a greater or lesser degree), many of Mozart's pieces are for the particular use of Masons themselves. The Kantante Die Maurerfreude (K.471) was written to honor the Worshipful Master Ignaz von Born.  The Adagio for Winds (K.111) was intended to be used commonly in the Lodge.  The Kleine Friemaurer Kantata (K. 619) was written for the inauguration of the New Crowned Hope Temple, and was the last complete piece of music that Mozart wrote.  And one can hope that shortly thereafter, when Masonic honors were given to Mozart after his passing, his own Masonic Funeral Music (K. 477) was played.