The Power of Speech: Rhetoric

Human beings are easily persuadable.  We love to latch onto ideas that pass our way, and then cherish them as our own.  And ironically, the more independent a thinker a man claims to be, the more likely it is, were he to evaluate himself honestly, that the ideas he promulgates were not his to begin with, nor has he ever truly analyzed them.  He has, in his ignorance, fallen under the sway of someone's rhetoric.  Rhetoric is the art of persuasion, which in and of itself is no bad thing; quite to the contrary, without rhetoric leaders could never lead, and followers would wander aimlessly.  However, in this day and age, as people are no longer formally taught the skills of rhetoric, they are primed to fall prey to bad rhetoric and be led unthinkingly like proverbial lemmings over a cliff.
The subject of rhetoric is immense; entire libraries have been written on the philosophy and use of it.  In this short paper I would like to highlight some of the ways people try to persuade others; in essence, arming ourselves against manipulation by the unscrupulous.
Rhetoric can be divided into three branches: Ethos, or an appeal to the speakers character and expertise, Pathos, or the use of emotion, and Logos, or pure reason and logic.  In a perfect world, only logos would be needed or used, but the truth is that for the majority of listeners ethos and pathos are much stronger (pathos being by far the strongest).  That does not mean that ethos and pathos are bad, and that they are only used by the deceitful.  However we as listeners must be aware that speakers are nearly always trying to manipulate our emotions.  By realizing this we can more easily stand back and evaluate what is being presented with a clear head.
Pathos is currently the dominating force in advertising.  We have all heard the mantra "sex sells."  Such ads appeal to some of our most basic drives, and as such, they can be difficult to resist. 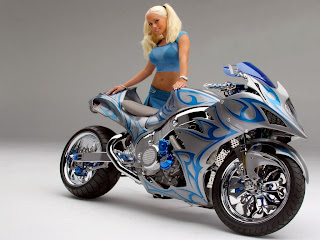 Often this is a pretty ham fisted attempt, and quite transparent.  It only takes a second of thought to realize that the girl has nothing to do with the bike, and is only there do augment desire on the part of the viewer.  That being said, it is surprising (and a bit dismaying) how well this tactic works.  But when viewers begin to see through the techniques of the ad men, it will not be long before those techniques are honed and made more subtle, yet with no less impact: