The Four Corners of the Earth: The Lodge Room as a Model of an Ancient Cosmology. 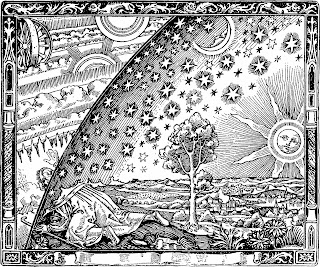 One of the purposes of Masonry is to aid the supplicant in his quest to find his place in life and how he fits into the scheme of creation.  One of the tools that helps realize this is that the lodge room may be taken as a model of that creation.  Yet the lodge room is not a model of the world as we know it, but rather that of an ancient design, common among the Babylonians, Egyptians, and the Ancient Hebrews, among others.  Understanding the principles of that worldview can open up new levels of symbolism in the structure of the lodge.  I shall touch briefly on some of them.
Though knowledge that the Earth is a sphere has been common (contrary to popular belief) for well over two thousand years, prior to that the idea of a flat earth reigned supreme.  The earth was held to be a flat expanse, often square, with a spherical heavenly dome.  God acted as an Architect when he laid out creation as if it were a domed building:  Isaiah says: "Who has measured the waters in the hollow of his hand and marked off the heavens with a span?"  And many other Old Testament scriptures describe God planing and then building the world as edifice.
The firmament was a solid hemisphere, generally thought to be made of metal.  In this firmament were set the stars, as well as the "windows of heaven," which, upon opening, would let the waters of the primordial sea flow in and fall to the earth as rain.  We are told that the ceiling of the lodge room represents the starry heavens, and it protects those beneath it from the turbulent forces outside.
In the lodge we find two pillars, which are most often taken as a representation of the pillars of the porch of King Solomon's Temple.  However, the celestial and terrestrial globes that sit upon their capitals bring to mind the ancient pillars of heaven and earth.  If the heavens are a solid dome, it stands to reason that it must be held up by something:  The pillars of heaven.  And the earth itself must have pillars to sustain its foundations.
The pillars stand at the four corners of the earth.  These four corners are aligned with the cardinal directions.  So too, our lodge rooms have four corners, and the four cardinal directions play a vital role in the layout of the room.  It matters very little if the lodge is physically oriented by the compass, but symbolically it is supremely important.  Were the Worshipful Master sits is called the East, and the rest of the room is laid our accordingly.  The path the sun makes in the world is symbolically echoed in lodge, rising in the east, passing through the south, to fall in the west, leaving the north dark.  The Senior and Junior Deacons circumambulate the lodge room with their staffs that are topped with a sun and moon.
Most ancient cosmologies have the idea of a mountain at the center of creation that reaches up towards the heavens.  This is a sort of omphalos that connects heaven and earth, and is a place where the gods may reside, or at least visit, like Mount Mashu and Mount Olympus.  Temples were built in high places, to emulate these mountains and bring man closer to God; ziggurats, the Tower of Babel, Mayan pyramids, and the Temple Mount at Jerusalem are examples.  In the center of the lodge is also a symbolic mountain where man can approach in an attempt to come closer to God:  The altar.
These are some of the most obvious parallels, and thinking about them in this way will open our minds to more and greater depths of meaning. 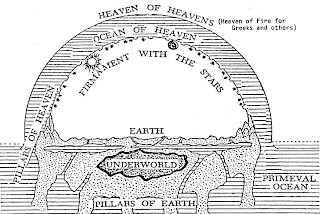