Gammadia: Historic Use of the Square

"In architecture not only are the corners of the building proved by the square, but all horizontal and perpendicular lines are drawn by it.  Without accurate squaring, a building would be weak and tottering in its first stages of erection, and must continue unfinished.  Without a well-defined and very clear code of the reciprocal laws and duties of the officers and members of any social, charitable, or scientific society, it is impossible for it to avoid being completely overthrown in a very short time.  Perfect legality is the only sure foundation for any society, and by it alone bodies of men are kept within their proper limits; for as soon as arbitrary power and physical force usurp the place of the laws of any society, it speedily becomes defunct; with great propriety, therefore, is the square put into the hands of the Worshipful Master, in order that he may keep the brethren within the square of the ancient charges of all Freemasonry.  This symbol must at all times, and in all places, be regarded as a great light, and the genuine Freemason is not only reminded by this light to do his duty to his brethren, but to all mankind."  - Gadicke.

The square is one of the oldest working-tools, and because of that it is also one of the oldest symbols in use among the human family.  As a symbol it always seems to hold connotations of order, correctness, covenant, and place.  Another term for the square is "gammadia," which name comes from the Greek letter Γ (gamma), due to the obvious similarity in shape.  There is a large body of artwork, around the world that use the shape, and always in a symbolic context.
The churches of Ravenna, Italy, hold many interesting examples of this symbol.  Churches such as the Basilicas of St. Vitale and St. Apollinare are particularly ancient, decorated in the early Byzantine style, with some of the most beautiful examples of Christian mosaics. 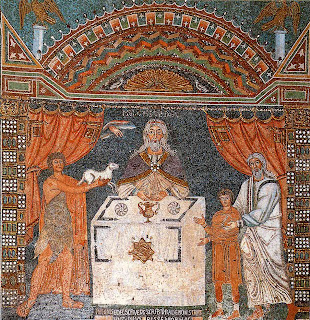 This mosaic is called the Sacrifice of Melchizedek.  Eight gammadia decorate the altar cloth, and eight more, joined together into two interlocking squares create what has become known as the "Seal of Melchizedek," which Bromwell ("Restoration of Masonic Geometry and Symbolry") associates with the 47th Problem of Euclid.  In the background the hand of God reaches out from behind crimson veils, also decorated with gammadia.  This use of symbols links the earthly sacrifice with the heavenly realms; a recognition that the sacrifice is proper and recognized. 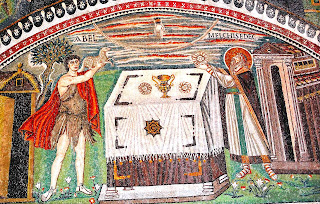 Here is another version of the same iconography.  Notice that the gammadia are not only on the altar cloth, but also worked in gold in the altar itself.  According to Talmud, "priests execute their most sacred religious duty, that of sacrifice, by applying the blood of the sacrificial animal to the altar in a gamma pattern."  And in the Roman Catholic tradition, the altar cloth is modeled after the sheet in which Christ was buried.  In this manner, the concept of animal sacrifice and Christ's sacrifice are united by the square, which symbolically define the divine laws concerning sacrifice and redemption.
The mosaics also show many figures dressed in robes that display the gammadia: Actual clothing elaborated with the symbol of the square have been found in Dura Europos (A Hellenistic Jewish site),  Greco-Roman burial sites in Egypt, Palmyra, Masada, and elsewhere. 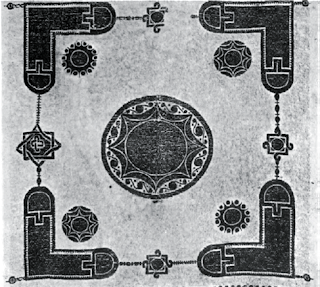 This burial cloth was found in Upper Egypt, and shows the same use of the gammadia.  It is a very large cloth; nearly 9.5' x 6.5'.
Other textiles associated with passing through death, such as veils in churches and temples around the world, are embroidered with gammadia: 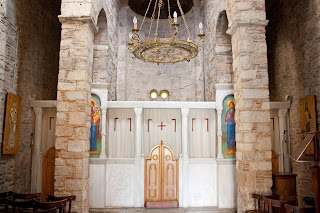 This veil, or chancel screen, is from the Agios Eleftherios church in Athens.  Its purpose is to keep anyone without the proper authority from seeing or entering the most holy part of the church.
Moving across the world, we find this interesting painting from Xinjiang:

It depicts Fu Xi and Nü Gua, the only survivors of the Great Flood.  In his role as the inspired creator of the I Ching, and father of the human race, Fu Xi holds the square, while his consort holds the compass.  This image is remarkably similar to the Hermetic Rebis figure: 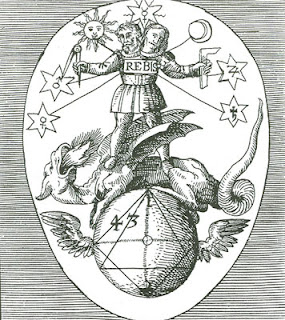 Buddhist mandalas also show gammadia, using them to illustrate the four corners of the earth: 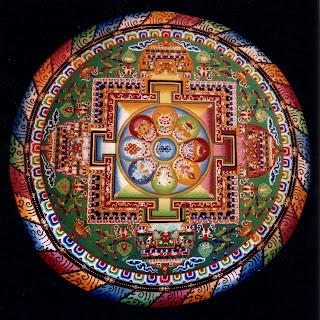 The tau cross is also made up of gammadia, as is the fylfot and the Greek cross.  The square is ubiquitous, and seeing it in its wealth of history and symbolism can only help us to appreciate it more. 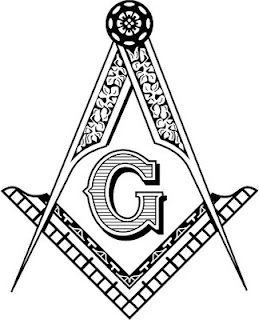