The Length of My Cable-Tow: Dedication and Priorities

The cable-tow, like all Masonic symbols, has a multitude of meanings and interpretations, but in the end, the symbolic meanings can be boiled down to themes of dedication and obligation.
The cable-tow itself is a simple rope, used to bind the candidate until after he has made his obligation.  Evidently, in the early days of Speculative Masonry, the cable-tow was functional:  If a man chose not to proceed in the ceremonies of initiation once he had begun, he could be dragged out of the lodge room by the rope and thrown into the street.  These days its use is purely symbolic, though the act of being bound does impress itself on the psyche of the candidate and causes him to realize the serious nature of what he is about to undertake.
When a man is bound he chafes at the bond and frets to be released.  In a like manner, a man's conduct in the community is bound by external constraints.  Societal pressures and mores, education, etc., demand a certain amount of conformity and good behavior.  While he may balk at these constraints, they keep him within proper bounds, and help him to be a productive, respectful, and upstanding citizen.  They are like a kite string, which through its restraining allows the kite to soar ever higher.  The societal norms disappear however, at least after a fashion, when they become internalized and a part of who he is.  At that point the man is free to use his internal compass as a guide, because the constraints have become more like guide-posts or map bearings.  The physical cable-tow is also released after the candidate has walked in darkness for a time and then spoken his obligation; the obligation which will be his compass from that time onward.
The cable-tow also literally connects the candidate to the brothers who conduct him about the lodge room.  But once the obligation is made, and the man is released from the cable-tow, he remains connected to those brothers; now by the fraternal bonds of that obligation.
The name, "cable-tow", seems to be a purely Masonic word, and its origins are lost in antiquity.  However, there are many speculations and theories about its etymology and meaning.  It seems at first glance to refer to a tow rope or mooring line.  But the term is much more likely to have deeper meanings.  According to Albert Pike, the origin is from the Hebrew term Khabel-to.  Khabel does indeed mean rope, but the verb that is derived from the noun means "to bind someone by a pledge," and therefore the noun kahbel also means "a pledge."  It is used in this way throughout the Old Testament: Job 22:6 and 24:3,9, Deuteronomy 24:6, and elsewhere.  It can also mean (in the plural) "bonds," as in "I took unto me two staves, one I called Beauty and the other Khabalim, bonds.  I cut asunder mine other staff, Khabalim, that I might break the brotherhood between Judah and Israel." (Zechariah 11:7-14).  When you add the third person possessive singular pronoun "to" or "his" (khabel-to), you get the definition "his pledge."  This is found used so in Ezekiel 18:7: "Khabel-to khavab yashayab." "Hath restored to the debtor his pledge."
"The Cable-tow is therefore the Hieroglyphic of a Pledge or Obligation, and it not only means the candidate's pledge and obligation, which, to become a Neophyte, he must take to the Order and to every individual Brother; but that, wearing it he represents men and nations, all whose rights of property, liberty, conscience and life, and they themselves, chattels in the form of human creatures and peoples, are pledged to their masters."  (Albert Pike)
But it is a mistake to think that the cable-tow refers only to the pledge from Brother to Brother within the bonds of the Fraternity.  Quite to the contrary, we are instructed that our Masonic duties should never impede or encroach upon any of those sacred duties we owe to God, our country, our neighbor, or our family.  Indeed, all of these duties should go hand in hand, but when they do not, it is up to us to determine what exactly is the "length of our cable-tow," and where our priorities lie.
In this phrase, "the length of my cable-tow," we learn that our obligations to the Lodge are superseded by our other sacred obligations, and it is these duties that determine the scope and breadth of our activities in the Lodge.  When we are conscious of the length of our personal cable-tow, and we are resolutely set to never cheat those more exalted duties of their due, then we can fully experience the joys of laboring in the quarry, without any of the conflict or stress that arises when our priorities are out of line. 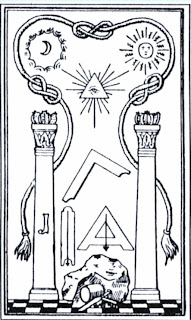