The Power of Design: Geometry

The above quotation from the Pop Wuj (perhaps more commonly known as the Popol Vuh) describes how the gods of the Maya used a very simple, yet very profound geometric process to layout the world.  This process is known to us as the golden ratio or section.  The golden ratio - known as φ - is one of those odd irrational numbers like π:  1.6180339887498948482....ad infinitum.  That seems like a rather unwieldy and useless number, but in fact it is one of the most fascinating numbers in geometry.
Now, geometry is the "measurement of the earth", meaning the study of shapes and proportions, and as the science of measuring the earth, it is predisposed to esoteric uses; containing ideas about creation and the nature of both the human and the divine.  The golden ratio is found so widely throughout nature and geometric figures that many ancients and moderns have considered it to be a key to creation.
It is found in the five-pointed star, where every single line segment is in perfect golden ratio to the others.  It is in the branching of leaves, the geometry of crystals and shells, the shape of brainwaves, and even on the atomic scale.  In fact, you need only look down at your hands to see the golden ratio:  From the tips of your fingers working back, each joint of each phalanx is 1.618 times larger than the one proceeding it.  The golden ratio is in the distance between your eyes, your lips, and the point of your chin.  Perhaps most pertinent  is the fact that your navel sits on an imaginary horizontal line that divides your body at the golden ratio. 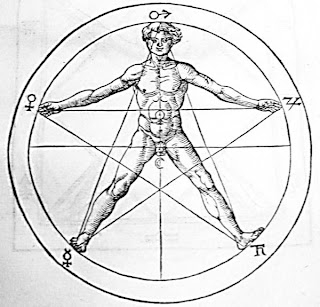 Why is this important?  Throughout history the navel has been regarded as the center of the body.  Why is this so, when it is obvious that the genitals are at the true midpoint, and would be a logical metaphysical center of the body as well (at least for the cynically-minded)?  By joining the idea of the golden ratio with the idea of the metaphysical Center, the human body becomes a representation of the Cosmos, and the focal point of creation.  This reminds us of our divine nature and our potential to perfect ourselves as a creation laid out by the Grand Architect of the Universe himself.
Many ancient cultures recognized similar concepts, and used the golden ratio to mirror the human body and the universe, as they understood it, in their architecture.  The Egyptians, Romans, Maya, and Medieval Christians quite often relied on the golden ratio as a way of ensuring æsthetic harmony and symbolic emphasis.
To this day many Maya use the golden ratio when they lay out their houses, because it makes their house "like a flower."  To the Maya, the flower was a symbol of creation, birth, rebirth, and the center-point of the universe between the worlds of life and death.  They use a length of cord to draw out a rectangle based on the golden mean, in the way described in the above quote.  They first lay out a perfect square with the cord.  Then they fold the cord that is the length of one of the sides in half.  This gives the midpoint of the lower side of the square.  from there, the cord is stretched to the upper right hand corner of the square.  the length of this diagonal is then swung down to the horizontal, which marks the furthest reach of a golden rectangle; one in which the short and long sides are in proportion to each other in a ratio of 1:1.618. 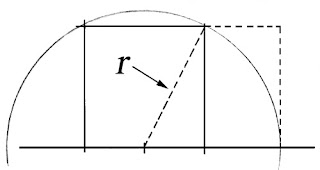