The Power of Sums: Arithmetic

The first secrets of operative masons were those of arithmetic and geometry.  Today, these hardly seem like subjects that could generate secrets, but when you begin to see all the practical applications that are possible through mathematics, and when you realize that most people at the time only understood basic sums, they do begin to appear nearly magical.  Through the use of arithmetic masons could lay out plots of land, raise huge arches, domes, and flying buttresses, and bridge wide rivers.  The methods they used were closely guarded secrets:  Knowledge was truly powerful.  As the knowledge of mathematics spread, the physical applications lost the aura of mystical secrecy.  But in their place, more cerebral mystical uses of arithmetic sprung up, such as magic and mystic squares.
While many of these arithmetical arrangements have a sort of whimsical aspect to them, at the same time they can be used to draw astonishing conclusions and patterns.  One of the more interesting arrangements is called Pascal's Triangle. 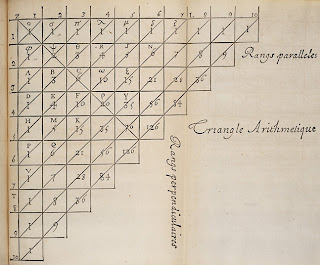 All sorts of interesting patterns start to emerge from this exercise; some of them simple, some of them very complex and rather difficult to understand.  For example, if you were to sum all the digits in any given row, the sum would be twice the sum of the digits of the preceding row.
The external diagonals contain only 1s.  The next diagonal in contains the natural numbers in order.  The next one is made of the triangular numbers in order.  (Triangular numbers are the numbers of objects that could be stacked to form a perfectly equilateral triangle).   The next diagonal contains the tetrahedral numbers. (Numbers of objects that can be stacked to form a tetrahedron, or three-sided pyramid).  The next diagonal is made up of the pentatope numbers.  In this way, the Pascal Triangle becomes a representation of the increasing complexity of dimensions:  The outermost diagonal represents the 0 dimension - the point.  Moving inward, you see a line - the 1st dimension - a 2nd dimensional shape, a 3rd dimensional form, and onward an upward.  Thus the triangle - a Masonic symbol of completeness and perfection, used by the Egyptians to signify the origin of all things, and the Christians to represent God - represents the whole of creation; what we can see, and what is far beyond the scope of our senses.
Also interesting is the fact that if you were to colour in all of the odd numbers, the resulting pattern is a fractal known as the Sierpinski Triangle.  A fractal like this is another perfect symbol of infinite growth and capacity. 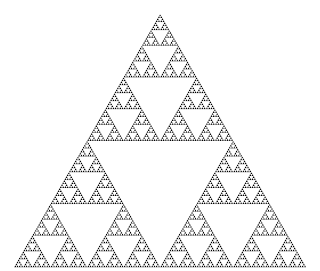 Another interesting attribute of the Pascal's Triangle is that if you were to draw shallow diagonals through the triangle, at about 30°, and sum the digits on these lines, you arrive at the Fibonacci sequence:  A series of numbers that are related to the Golden Mean, and are found ubiquitously throughout the natural world.  In fact the Fibonacci numbers have often been used as an example of the theoretical underlying mathematical structure that describes and builds the entire universe.
One triangle provides a wealth of symbols and insights, and provides more with greater depth of study and insight.  It is no wonder that the ancients saw arithmetic as one of the great Keys and Sciences.