The Power of Thought: Logic

Logic:  If you grew up a science fiction junkie, the word conjurers up images of emotionally distant Vulcans from Star Trek or single-minded Daleks (depending on from which side of the pond you pick your television programs), far from the warmth and emotion of mankind. 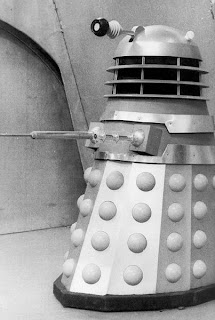 However, logic is one of the most human of humanity's atributes.  By logic we are able to analyze any given statement and decide whether it is true or not, and once having decided on the statement's veracity we are able to choose to either incorporate and act on it, or ignore it and go our own way.  Most people have a basic ingrained grasp on the concept of logic:  They can often tell if something sounds wrong or right, though they may not be able to explain why, unless they have studied the field of Logic itself.  Modern philosophers tend to argue that logic has little to do with the judgement of right and wrong - that it only deals with formal validity - but Kant expressed that judgement of right and wrong should be an aspect of logic, and as logic in the purely abstract sense is of little use to the layman, I feel it is safe to agree with Kant on this.
The study of Logic is based on relatively simple tenants, though the combination of those tenants results in a surprisingly complex and nuanced system.  As it is so very complex, this essay will only deal with a very small portion of the field:  The properties of logical systems - consistency, validity, completeness, and soundness.
Consistency simply means that no part of an argument may contradict any other part.  To say that A=B, and B=C, but C≠A is a contradiction, so the statement is logically false. but A=B, and B=C, so C=A is a consistent statement.
Validity if the aspect of an argument that describes the relationship of the premises and the conclusion.  For a statement to be valid, the conclusion must be the necessary result or the combination of the premises.  This is perhaps most easily seen in the use of syllogisms, where two premises are stated, followed by a conclusion.  For example:  All dogs hate cats.  Rascal is a dog.  Therefore Rascal hates cats.  What makes this valid is not the truth of the statement, but rather that the conclusion is a necessary result of the combination of the premises.  This syllogism is equally valid: All cars are red.  I am a car.  Therefore I am red.  You can see that truth has nothing to do with validity.  As an example of a not valid statement, you could say: All cars are red.  I am red.  Therefore I am a car.  The premises do not lead to that and only that conclusion, because it is entirely possible that other things besides cars are red; I may be a cherry or a poppy.
The completeness of a logical system or arrangement means only that if the system is true, then it can can be proven true.
Soundness is the converse of completeness.  Soundness means that an argument is both valid and true.  Look at the following sound syllogism: All men are mortal.  Socrates is a man.  Therefore Socrates is mortal.  These statements are valid, as described above, and the premises are true.  Now an example of a not sound syllogism: All creatures with wings can fly.  Emus have wings.  Therefore emus can fly.  This is certainly valid - the conclusion is a necessary result of the premises - but the first premise is not true, therefor the argument is not sound.
I know that these concepts are rather abstruse, and that they are only the lightest scratch on the surface of the topic, but I imagine that if you contemplate these concepts for a short while you will begin to see how useful they can be in analyzing arguments for truth, and in creating your own.