Numbers play a very important role in the symbolic language of Masonry.  It is, of course, only logical that mathematic symbolism should be prevalent:  As speculative Masonry is descended from operative Masonry, the intellectual tools, as well as the physical ones, became the basis for communicating truth.  In the Winding Staircase Lecture, we are presented with one of the fundamental series of numbers in Masonry 3, 5, and 7.
These numbers appear repeatedly, both in a progression and individually, throughout nearly all of the mystery traditions and religions of the world.  It cannot be coincidence; there must be profound truths in these numbers that guide us to a better understanding of humanity and divinity.
What are these truths then?  I had planned on writing this essay precisely on that question, looking at each number individually and as a progression, and ferreting out the meanings behind the symbols.  But as I began to research those numbers, an understanding began to grow in my mind.  The levels of meaning are many - so many that an essay like this would only just scratch the surface.  There are hundreds, if not thousands of books and internet sites that present meaning after meaning.  Reading through the information, I found myself fascinated, but not particularly enlightened.  That was when it occurred to me that a presentation of symbolic meanings truly has little value, except perhaps to pique curiosity and interest.  I could certainly regurgitate hundreds of interesting tidbits about these numbers, but I had to ask myself if that would really be an effective use of time.  My conclusion is that it would not.
That these numbers are important is obvious, and that there are profound depths of wisdom to be reached in their contemplation is just as apparent.  But contemplation is the operative word there.  If one wishes to find any degree of enlightenment, he needs to embark on the search for enlightenment personally.  That does not mean that he must do so in isolation and silent meditation:  Discussion and study are necessary starting points, leavening agents, and catalysts, but symbols become powerful agents for change when they work on the soul, not just the intellect.
So I challenge you, dear reader, to take this brief essay as motivation to begin pondering on these three numbers and see what personal insights you can gain from them.
Begin with the intellectual pursuit:  Perhaps write out as many layers of meaning as you can think of hiding in those three little numbers.  Look at them from different perspectives:  Consider them as mathematical constructs, as religious symbols, as aspects of the natural world and of human behavior.  Then take time to ponder which of these meanings might currently hold truths that are important for you at this time and place.  And finally, spend some time in meditation so that those truths gleaned from the numbers can settle deep within you and begin to work their magic. 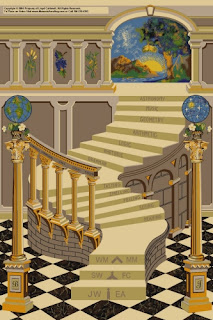