"In His hand He took the golden Compasses prepar'd. . . to circumscribe This Universe, and all created things:  One foot he centered, and the other turn'd Round through the vast profunditie obscure."
- Paradise Lost 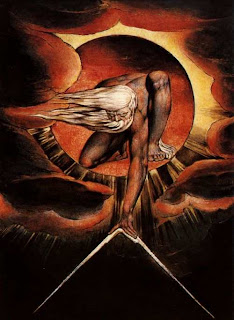 Milton's words, describing the Creation, present the universe as a circle, drawn by God's own hand.  This was, of course, not an idea invented by Milton, though beautifully presented by him.  The circle has always been a symbol of the heavens, and when combined with the square of the world it becomes a representation of the whole of creation.
Dante, another master of words, describes Paradise as a series of concentric circles of angels moving around the Light of God, who resides in the center.  The circle defines a sacred space, and the center of that circle is the most sacred part; a kind of focal point. The Acts of John, a Gnostic apocryphal work, describe a prayer circle that was held by Jesus and his apostles:  "So he told us to form a circle, holding one another's hands, and himself stood in the middle."
The square is a well known symbol of the earth:  Think of the phrase "the four corners of the earth," along with the four cardinal directions.  This is an old Semitic concept:  The earth was foursquare, with the pillars of heaven holding up the hemispherical dome of the sky.  In that dome were the windows of heaven, which could be opened to allow the waters of the primeval sea to come through as rain.
Imagining this image from above, we can see the circular heavens inside the square earth: The circle squared.  This is then the image of the contact between the celestial and the terrestrial, the place where God and Man may communicate, and where we may receive spiritual enlightenment.  "In this place the initiate confronts and achieves union with the divine realm." (J. M. Lundquest)
We find this in the construction of the Lodge.  Within the four walls of the lodge room we circumambulate the altar which is located in the very center, and upon which lies the Volume of Sacred Law.  As we strive to grow and approach the center of the squared circle more closely, we become more aware of the Divine Presence in our lives and in the World around us.