A White Lambskin: The Masonic Apron 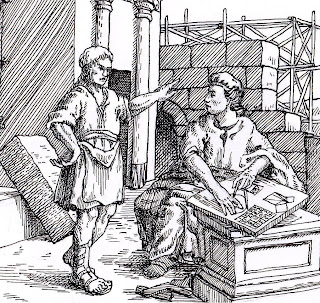 The most universal, recognizable, and distinguishable part of Masonic regalia is the apron.  An apron is proudly worn by every Brother, from the youngest Entered Apprentice to the Most Worshipful Grand Master.  This apron speaks to the ancient linage of the Craft, as it evolved from the aprons worn by the operative stone masons as the worked in the quarries and building sites.  The shape and form has changed much from those days, but in Speculative Masonry the apron has always been a badge, an emblem, and a symbol.
As a badge, the apron marks a man as a Brother.  It is presented to him upon his first initiation, and worn by him to the grave.  It signifies that he has decided to unite himself with the Masonic Fraternity, and subscribe to its tenants and edicts.  As such, it must always be worn when in lodge.  The manner of wearing the apron identifies his status in the degrees to other Brothers, and certain aprons are decorated in such a way as to mark the role played by its wearer in the governance and operation of the Lodge.
The apron, as a white lambskin, is an emblem of purity:  White being the colour of innocence, and the lamb being the emblem of a pure sacrifice.  It is made of the whitest leather possible, and if it is decorated, it is done so with the greatest artistic merit and beauty possible, so as not to sully its emblematic purity.
Symbolically, the apron reminds its wearer of the ties of brotherhood, and his duties to his brothers.  It is also symbolic of the age of the Craft, uniting the wearer into the long chain of speculative and operative Masons that stretches back through the centuries.  The apron can also symbolize the authority one man may have to instruct another who has not progressed as far in the degrees and the knowledge of the mysteries of Freemasonry.  The shape of the apron - the square of its body, the triangle of its flap, and the circle of its cords - hold symbolic truths, as does the blue edging, for those willing to seek them out.
The apron is our most common, and the most beautiful reminder of our obligations and oaths, and if always kept before our eyes will inspire us to ever live worthy of the honour of wearing it.