Death and Perception: The Chamber of Reflection

Self awareness is a watchword of mystery traditions.  Ceremony and ritual are designed to create for the initiate a pathway by which he arrives at a greater knowledge of himself, and having gained that, a knowledge of his place in the Cosmos and his connection to Deity.  One of the most intriguing tools that Freemasonry has to effectuate this is the Chamber of Reflection.
These days the chamber of reflection is not well known, but such was not always the case.  Though it now primarily exists in the ceremonies of the York and Scottish Rites, it was once a fundamental part of the Blue Lodge degrees.  The decline of the chamber is directly tied to the Morgan Affair and the rise of the Anti-Masonic Party in the 1830's:  In an attempt to distance themselves from anything that could be called dark or sinister by the ignorant masses, Masons phased out the use of the Chamber along with many esoteric philosophies and interpretations of the Craft.  As this occurred in the United States alone, the chamber of reflection may be found in greater usage in other countries around the world.
In brief, the chamber of reflection is this:  A dark room - if constructed specifically for this purpose it is often made of rough-cut stone - that represents a cave.  The room is bare of furniture except for a small table and stool.  On the table is a variety of objects with symbolic meanings, lit by a single candle.  Written on the walls are phrases and warnings.  The candidate is brought blindfolded into the room and left there alone to contemplate or reflect, and write his thoughts before being brought into the Lodge. 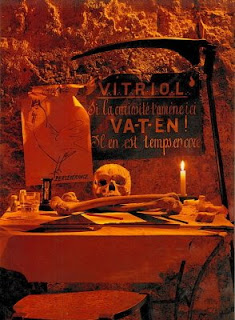 At first glance the accoutrements of the chamber call up morbid thoughts of death.  This is the candidate's first perception, and as such it is tied to his experience in the outside world.  That is a world in which the mystic, spiritual, and religious are, through ignorance, closely tied to death.  But this is where the chamber of reflection begins to serve its primary duty; that of changing perception.  As the candidate takes up the quill, he begins to perceive that the symbolic objects are far less symbols of death than they first appeared.  Water and Bread may be the first objects that shake him from his morbid thoughts, as these are, on the surface at least, obvious symbols of life.  Then he begins to question the other objects.
The objects in the room begin to tell a story, and it is a story of Change.  Some of the symbols are purely alchemical, and alchemy is far, far more than a romantic notion about making gold from lead; it is the science of change.  And the most vital alchemical change is that which occurs in a man's soul.  On the table are salt, sulfur, and mercury (often represented by a drawing of a cock) , which are, according to operative alchemists, the basic ingredients in every living thing, and they can be drawn out, purified, and recombined to form the Philosopher's Stone, or the "hidden stone."  On the wall of the Chamber of Reflection are the instructions for finding this stone, hidden in the acronym: V.⠢I.⠢T.⠢R.⠢I.⠢O.⠢L.⠢ which stands for the Latin phrase "visita interiora terræ, rectificandoque, invienes occultum lapidim, translated as "Visit the interior of the earth, and by rectifying you shall find the hidden stone."  This rather esoteric injunction can be understood to mean the following:  You are the earth, as you are the center of creation, as far as your perception goes.  By looking inward to the center of your being, and rectifying - or making straight - what you find there, you will discover the way and the source of eternal life.
In the light of "Change," the other objects begin to give up their secrets, and soon it may be discovered that there is not an object on that table that does not reflect this core truth:  Change is the essence of existence, and without change there is no progression.  All that is dark, and all that is light, serve only to stand in opposition to each other, and, rather than be locked in a static balance, they drive change forward.
It is most likely of course, that the candidate will not understand many of the symbols, and that it will only be later, after study, that he begins to fully apprehend his experience.  But at the very least, the chamber of reflection will create the appropriate somber mood a candidate should have before he steps into the Lodge on the path of Growth, Progress, and Change.
It is in that stepping out of the Dark of the Chamber into the Light of the Lodge that the symbolism is completed.  In doing so, the candidate literally plays out the drama of Plato's Allegory of the Cave.  When he is seated in the chamber of reflection, he is chained in the cave, bound by the bidding of those brothers who sat him there.  This is the Everyman, bound in the ignorant darkness of the World.  As he removes his blindfold he sees the items before him as meaningless shadows, but as he turns to the light of the candle, he begins to perceive their deeper, truer nature, just as the allegorical man begins to see the light of the fire and perceive the nature of the objects that had cast shadows on the wall.  The Everyman has begun his search for knowledge.  Eventually, just as Plato's man is dragged out of the cave into the light of the sun, so too is the candidate brought out of the dark of the chamber into the light that awaits him in the lodge room.  And then, when he has gained possession of such great light and truth, he goes back into the world as a Brother in order to share and bring others to the light.
The chamber of reflection is one of the most beautiful and profound symbolic experiences that can be offered an initiate, and so it is lamentable that it is so rare in Masonry today.  But this is changing.  As a new generation of men seek out Masonry, they do so with the mindset of mystical initiates.  And as they are longing for a deep, meaningful, and ritual experience, they are leading lodges back to our rich ceremonial heritage, and use of the chamber is happily increasing across the country.