The Western Spirit: Masonry and Utah

This is going to be a very brief outline of the history of Freemasonry in Utah.  As a disclaimer, it will not go into depth in many of the more convoluted and more difficult issues, but merely illustrate them; hopefully doing so without any evident bias or judgement.  I of course do not speak in official capacity for any of the organizations mentioned herein, but at the end is a list of references from other scholars that may be examined for further information.
The first group of Freemasons to enter into what became known as Utah, on July 24th, 1847 was the wagon train of Brigham Young; the forerunners of the Mormon Pioneers.  In that train were at least 76 (possibly as many as 124) Masons.  At that time, practically all of the Mormon leadership were Master Masons.  However, Young had witnessed a lot of strife and controversy come from the close relationship between the Mormon Church and Masonic lodges in Nauvoo, Illinois, as well as knowing that brother Masons had been involved in the murder of Joseph and Hyrum Smith.  Therefore, although he was quite proud of his Masonic membership, Young decided to move the church away from Masonry, and he did not pursue the formation of a lodge.
The first lodge in Utah was formed of soldiers from Johnston's Army, which had come to Utah to put down the so-called "Mormon Rebellion."  In the winter of 1858, 23 men formed Rocky Mountain Lodge No. 205 at Camp Floyd.  They built a lodge there, and 162 candidates were quickly accepted.  This lodge was in existence until 1861 when the soldiers returned to the East, due to the outbreak of the Civil War.
The nearly complete lack of cordial relationships between soldiers and settlers hindered Masonic growth, as Brigham Young became upset upon perceiving political maneuvers stemming from the Lodge that were detrimental to the Mormon settlers.  This is when he stated that Mormons were in possession of a "Celestial Masonry", and that they had no need for Freemasonry.
In 1865 fourteen Masons unsuccessfully petitioned the formation of a lodge from the Grand Lodges of Nevada, Colorado, and Montana.  These Grand Lodges were willing to grant a charter with the stipulation that Mormons not be allowed membership (most likely a reaction to the difficulties that had arisen between Mormon and "Gentile" settlers), but the men petitioning took this as a violation of their Masonic rights.  Eventually in 1868 they obtained a charter from the Grand Lodge of Kansas.  In 1866 other men had successfully petitioned the Grand Lodge of Montana, evidently being willing to accept the strictures imposed.  The resulting three lodges ended up becoming the basis of the Grand Lodge of Utah, formed in 1872.
In the 1890's, The wives of a number of Masons attempted to begin a public library.  In spite of a valiant effort, funding was lacking, and the Ladies Library Association turned over their books to the Grand Lodge, who opened the Masonic Public Library.  Eventually it became economically unfeasible to continue, and the Grand Lodge donated the books the the Mayor of Salt Lake City, from which sprang the Salt Lake City Public Library.
Early members of the Grand Lodge were openly against the Mormon Church, and proclaimed in 1925 that the Mormons were Clandestine Masons, due to resemblance between the forms of Mormon temple ritual and Masonic ritual, and therefore Mormons were banned from becoming Masons or from visiting a lodge, under the jurisdiction of the Utah Grand Lodge.  By this time no other Grand Lodge held such a position, and the restriction only had effect in Utah. The Mormon church retaliated with the policy that Masons could not hold high positions of authority, in or outside of Utah.
In 1927 the Salt Lake City Masonic Temple was completed and dedicated.  Housing the Utah Grand Lodge, as well as several Lodges, it is an impressive and very beautiful structure.  In an effort to reach out to the community, the Grand Lodge has opened the Temple to visitors, and tours are given every week.
In 1984 the Grand Lodge officially rescinded the restriction on Mormons, and offered the hand of Brotherhood.  In return, the Mormon church overturned the former position on Masons in positions of leadership, and there is now currently no disharmony between Masonry and the LDS church.
Masonry has grown slowly in Utah - being one of the smallest jurisdictions - but steadily, and there are now 30 lodges of various sorts in the jurisdiction, as well as other Masonic bodies, such as the Order of the Eastern Star for women and men, DeMolay for young boys, and Job's Daughters for girls. 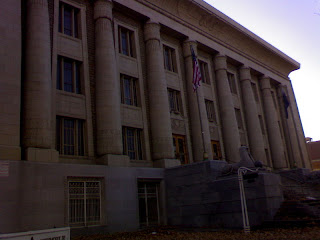 LeGrand Baker, "Murder of the Mormon Prophet"
D. Michael Quin, "The Mormon Hierarchy: Origins of Power"
Richard L. Bushman, "Joseph Smith: Rough Stone Rolling"
John L. Brooke, "The Refiner's Fire"
Dr. Mervin B. Hogan (Sec. Research Lodge of Utah), "Mormonism and Freemasonry: The Illinois Episode"
Robin L. Carr (Illinois Lodge of Research), "Freemasonry and Nauvoo" .
S. H. Goodwin, P.G.M. "Freemasonry in Utah: Mt. Moriah Lodge No. 2"
Dr. Mervin B. Hogan, "The Origin and Growth of Utah Masonry and its Conflict with Mormonism"
"Utah History Encyclopedia" (see online: http://www.media.utah.edu/UHE/m/MASONRY,FREE.html).
S. H. Goodwin, P.G.M. "Freemasonry in Utah: Argenta Lodge No. 3"
S. H. Goodwin, P.G.M. "Freemasonry in Utah: The Masonic Public Library"
Michael W. Homer, "Similarity of Priesthood in Masonry:  The Relationship between Freemasonry and Mormonism" in "Dialogue Vol. 27 No. 3. pp. 112-113 "Since [1984] increasing numbers of Mormons have been initiated, despite church discouragement.  The strongest church statements were made before World War II, although as recently as 1983 the 'General Handbook of Instructions', under the heading 'Secret Organizations,' warned 'members strongly not to join any organization that. . . . is secret and oath-bound,' and further advised that 'local leaders decide whether Church members who belong to secret oath-bound organizations may be ordained or advanced in the priesthood or may receive a temple recommend.'  This policy was removed from the 1989 edition of the 'Handbook,' . . . . no church discipline has been taken against members who have joined the Craft since 1984."